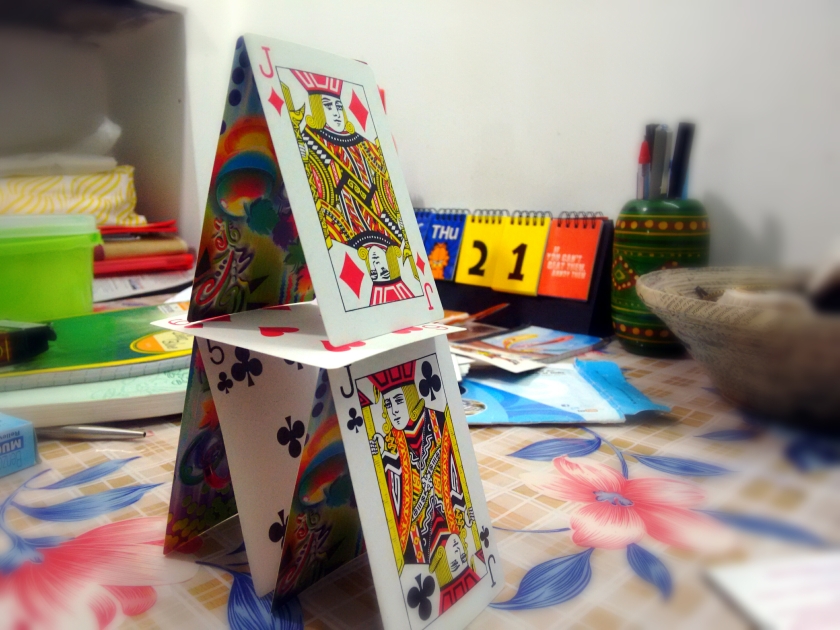 My father has always been a rather distant entity in my life. Always there, but never really. I’ve never exactly been petted by him, as is the case with most fathers in the Indian scenario. But two things that I hold fast to my heart till date are cards and carroms – games I shared with him, and those he excelled at.

It was pure joy to watch him deal a hand, shuffling them this way and that, and even more so for a child. He is a leftie which was unique itself then – the way he held his deck and flung them out in triumph. We’d sit in a circle, Father, his friends, their kids and I, and we’d play for hours even as our mothers chided us in the background. I don’t think I’ve ever seen him lose; he was great at cheating even. And carrom! He would always make the first strike, hitting the coins exactly at that sweet spot that never revealed itself to me even after years of persistent practice; I can still recall the awe I’d feel when he sent coins flying in four directions with that single strike, bagging four coins at once. Two blacks and two whites. And of course, the red queen would land in his lap in no time.

He had a drinking problem, and managed to gamble away a lot of money. As time went on, responsibilities and liabilities grew and Father quietened down. I cannot ascertain if the change was abrupt or gradual.. He refused to play with us anymore even when we pleaded. Maybe one round of rummy once in a while, but then those too stopped. Even as the drinking came down and he started getting a hold on his life, he was not the same fun person he used to be, and I do remember that I often wished he’d just drink, just so he’d look happy. The cards lay unused and gradually disappeared in the way things do, and the carrom board came to life infrequently when I had a random cousin or friend come over. Cracks developed on the board and the wood pealed at places and it was quietly put away. I too grew up.

A few days ago, some friends came together and organised a little party for Christmas on the roof of their house. Someone brought along a few decks of cards, and as I spread my share in my hand after more than a decade, I was reminded of the rare laughter and fun and frolic that I shared with Father. Fragile times. A huff and a puff and it all fell down. My childhood really was a house of cards.

When I left the party, I held on to a deck and took it back with me. For home.

Every time I am done with a large deadline, I feel an enormous wave of calm wash over me, as if all my worries were over for the rest of my life. Of course, I am well aware that they are not, but somehow my brain shuts down negativity and allows myself to indulge in […]

Today is marked by light. I’ve often wondered about the denial one sees in addicts. I’ve seen it in my father who’d always proclaim his ability to stop drinking if he wished to; how it wasn’t something that controlled him.

I checked with my neurologist husband and even he couldn’t verify how true it was. That post about hacking happy hormones. How endorphins are evoked through exercise or laughter, dopamine through finishing tasks, oxytocin through hugs or pets and serotonin through meditation. But it felt right to me somehow. In any case, I’m running low […]

Disclaimer: This probably is not as hilarious as it’s in my head. Proceed cautiously and flee as necessary. Oh, and the picture has nothing to do with the post; I just thought it made for an interesting array of geometric shapes. Unless.. you considered an artistic expression of the various contours that are juxtaposed in […]

I didn’t have enough words in me to capture that moment. So I wondered, why not capture it as it is. One of those rare moments of clarity when the world falls away and all that remains is a feeling of silent awe of being here, in the present moment, as part of something infinite.

When the ghosts of old love refuse to leave.